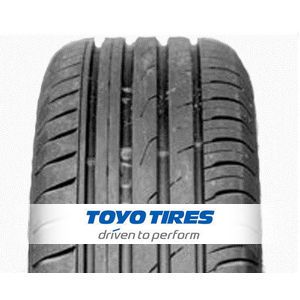 The Toyo Proxes CF2 is a tyre specially designed to take on rugged surfaces. Good resistance and grip.

The Toyo Proxes CF2 is a tyre specially designed to take on rugged surfaces. Good resistance and grip.

Please note that reviews left on the site are subject to a control procedure. Reviews are listed in chronological order only.

Having replaced a full matching set of Performant UHP tyres on the Lacetti which were about half worn, but had gone very hard with age, the Toyo tyres are a big improvement. I have experience, having fitted Toyo CF2s to another car we have and having been pleased with the improvement to road manners I opted for the same tyre on the Lacetti. Previously, accelerating rapidly from a t-junction in the wet would have the tyres scrabbling for grip, the Toyos just grip and go without drama, even when deliberately booting the accelerator. Tyres supplier had a recent date code and were delivered quickly (

Just returned to West Wales from a journey to Belgium. The tyres were worn in for some 500 miles before the journey and covered some 1200 miles during. The first disappointment was the road noise! Much worse than the Firestone Firehawk's that were fitted previously! Stability was also questionable at times, they just respond how I hoped they would. I went for the XL option, but the side-walls are noticeably thinner than the Dunlop and Bridgestone tyres I've had previously! I really wanted to like these tyres as they are competitively priced and do handle well in the wet! From what I can see, they are wearing evenly and have some longevity!

To review the Toyo Proxes CF2, you first have to log-in by clicking here.